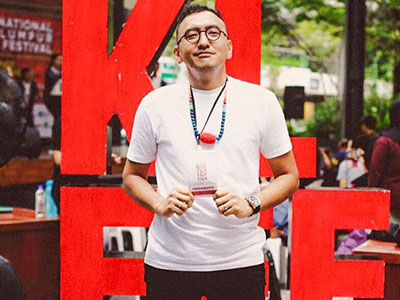 I would like all of us to recall our achievements, of which many will contribute to the sustained growth of Malaysia’s leading environmental film festival, the KLEFF.

Truth be told, although KLEFF is the first and the biggest eco film festival in Malaysia, we are a relatively small organisation with a big mission. From a humble inception in 2008, this year we are celebrating the 10th Anniversary for KLEFF. Isn’t that amazing?

Because of that we are proud to announce the all-new KLEFF logo, as our renewed mission to deliver the most urgent environmental message to our audience. I had a fun interview session with our designer, Azizul Yusof @ JOY to get some insights of himself and his new logo design.

January is the most crucial month of the year (so is the other months of the year for us, honestly) and this is the month where we invite film makers from all over the world to submit their films for this year’s festival.

We are also calling for partners, sponsors and collaborators to join this movement and help us develop the content for this year’s KLEFF2017.

Lastly, we’re super excited to share with you the KLEFF2016 Official Video Highlight. It got us teary and excited at the same time to make this year’s festival the best ever.

It is the 10th Anniversary for the International Kuala Lumpur Eco Film Festival (KLEFF) and we are CALLING FOR TONS OF ACTION!! If you have an inspiring and urgent environmental story to share, submit your film to us here!

KLEFF is an annual environmental film festival organized by EcoKnights since 2008 and has been running for 9 years, serving as a platform to facilitate building a nation of ecologically conscious businesses, individuals, and communities through on-ground activities and film screenings focused on critical environmental issues and stories such as pollution, transboundary haze, indigenous people’s rights, wildlife protection, nuclear energy, climate change, sustainable food production, waste management, local environmental heroes and more as a platform to both local and international film makers. The festival’s themes are the environment, ecology and sustainable development in a comprehensive sense.

Here is a summary of our deadlines:

For more information visit here or contact us at info@kleff.my. We are so excited to see what kind of films that will be submitted for this year’s film festival! 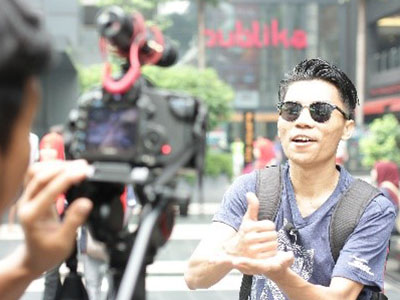 You’ve seen our KLEFF 2016 visuals (posters, buntings, festival guide books and bookmarks) and you’re probably wondering who the mastermind behind the designs is. He is no other than EcoKnights’ designer, Azizul Yusof (in the picture below) or we know him as Joy.

In an interview between Joy and Fabs, the Ipoh-born designer talked more about his interest in art, his work with EcoKnights and his new logo design for the 10th International Kuala Lumpur Eco Film Festival.

Fabs: Tell us a bit about yourself (your background, interest, influence).

Joy: The name is Noor Azizul Mohamad Yusof. I’m 28 years old from good ol’
Ipoh Mali. Art, fashion and music are my passion, and have always been a part of my life even before I started graphic designing. As an avid football fan, I play socially in minor local leagues and my favourite team is Arsenal Fc. I’m a self-taught graphic designer who takes his fill of inspiration from the works of other artists such George Lois, Massimo Vignelli, Keith Haring, Jean Michel Basquiat,Milton Glaser and some other designers.

Fabs: You have been doing freelancing with EcoKnights for about one year or so,
tell us how it started and what do you love most about working and contributing for EcoKnights.

Joy: Well I started as a freelancer for EcoKnights back in 2015 when I got a call
from our Programme Director Mr. Fadly asking if I’m up for a designing challenge for the 2015 Langkawi Eco Film Fest collaterals, and I took that challenge and delivered the task successfully, I hope! However, my first brush with EcoKnights was in 2012 when I decided to follow my friends Afiq & Jabar to be volunteers for KLEFF 2012. At that moment, I’ve already felt something that I couldn’t describe, like a good vibe all over. Teamwork in EcoKnights is the best I’ve experienced. I really appreciate the efforts our honorary leaders, Ms Yasmin and Mr Fadly, showing and guiding us along the way and I feel that it has allowed the team to produce a good end result. I like this atmosphere that they’ve cultured.

Fabs: What are some of the most satisfying projects (or designs) that you have
done for EcoKnights in the past?

Joy: So far up to this date I think it’s the KLEFF 2016 collaterals. One day I will
look back on how it started and the day I got the task and was entrusted to do the collaterals is the day I will remember for the rest of my life.

Fabs: Share us about your design for the new KLEFF logo. What was the story,
the process and how did you come up with it and what’s the meaning of the new logo?

Joy: It’s a Film Festival, so a film strip is a must for the logo, simple and direct.
The old logo had a branch with leaves, signifying environment. With the new logo however, I decided to give emphasis on the film festival bit. The sentence Eco Film Festival on its own suggests that this is not a regular film festival. Our brand must be able to convey the message any medium.

With the age of increasingly sophisticated technology, and a variety of media platforms, branding or to be exact, logo, should be versatile enough to comply with every requirement of the available platforms. The previous logo has served successfully in introducing KLEFF brand for the past 10 years. Now for the next ten, I hope the new logo will perform better in terms of passing along our message, on old and new platforms. A new feature incorporated is that the new logo has been made to be responsive and adaptable on all media so as to make KLEFF recognizable just by glancing an alphabet.

Apart from that, I remember when designing KLEFF 2016 poster, the previous logo was a vertical typeface and had limited space. I had to resize the logo smaller until it felt like the logo has failed to convey any message. With a responsive logo, hopefully all this will be resolved. My way of designing, I always find something as a referral from features of previous design / logo so that I can always incorporate that in the new one. That way, the logo doesn’t lose its authenticity. The new logo also has a corporate feel to it, which is exactly what we are going forward with.

Fabs: What was the challenge in coming up with the final design?

Joy: Convincing the new logo to EcoKnights for sure. Well of course the
challenge is that I have to make sure the logo is perennial, and at the same time the logo must be able to convey its message and represent the look of the festival in its self. I had a few moments of designer block, but with the help of EcoKnights Founder and the team, we manage to pull it off.

Fabs: How do you think the logo will suit the KLEFF feel for the next coming years? How will the public remember the logo?

Joy: Visually, I hope with a color combination of gold, black and white, it shows
formality, elegance and prestige. This comes hand in hand with our future to become corporate, and showcases KLEFF’s maturity. I think the public will quite appreciate that. The colors aren’t too old or too young, it captures all.

Fabs: What else do you hope to achieve in the future (from creative and
communications perspective) with EcoKnights?

Joy: The biggest dream that I wish I could achieve with EcoKnights from
creative and communications is that I hope one day EcoKnights will be a one stop centre for producing eco-graphic-content/material and hopefully those graphics will become one of the well-known factors in EcoKnights!

The official video of the 9th International Kuala Lumpur Eco Film Festival (KLEFF) is finally here, check THIS out!!! A big thank you to the Begedas production team for creating such an awesome video of KLEFF 2016. 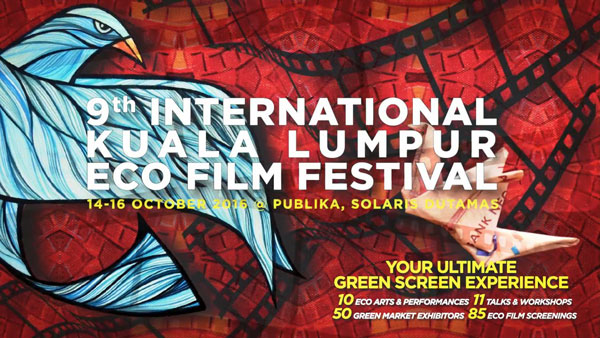 Now in its 10th year, the Kuala Lumpur Eco Film Festival, produced by environmental NGO, EcoKnights features environment-themed documentary, feature, animated, archival, and experimental and children’s films from around the world. KLEFF showcases ground breaking films, traversing the relationship between humans and their environments, challenging the way people think about the natural world and inspiring them to discuss, explore and act on important environmental issues. The films will be shown at various venues around Kuala Lumpur, including art spaces, cafes, universities, high schools, corporate officers and community theatres. Filmmakers and special guests will discuss their work at the festival. Most screenings are free to the public and include discussion with filmmakers or scientists on emerging environmental concerns and issues.

The Festival’s signature programs include the Green Market, Film Making Workshops, the KLEFF Awards Night, Green Vibes and more. The Festival hosts a number of juried cash awards, as well as audience awards.

The KLEFF’s official host venue is Publika Solaris. More information can be found at www.kleff.my.

EcoKnights® is a non-profit environmental organization that champions sustainable living and supports a community of film makers, and environmentalist who embody diversity, innovation and uniqueness of vision. EcoKnights’ Board of Committee Members, staff and constituents is comprised of an inclusive community of individuals across ability, age, ethnicity, gender, race and sexual orientation. EcoKnights serves the community through development-led interventions from education and awareness programs to research; and public participation programs to consultation. EK’s partners range from government agencies and communities to corporate agencies and NGOs. For more information about EcoKnights, log on to www.ecoknights.org.my.

To ensure you get our latest news, add kleff@ek-newsletter.com to your address book.

To forward this newsletter to a friend, click here.

If you do not want to receive further information from Kuala Lumpur Eco Film Festival, please {unsubscribe}Unsubscribe{/unsubscribe}. You will be immediately removed from the list.

The Kuala Lumpur Eco Film Festival (KLEFF) is organized by EcoKnights, a non-for-profit environmental organization registered with the Registrar of Societies Malaysia. EcoKnights’ core focus areas are in environmental education and awareness using innovative and creative platforms such as the KLEFF. More information about EcoKnights can be obtained from www.ecoknights.org.my.